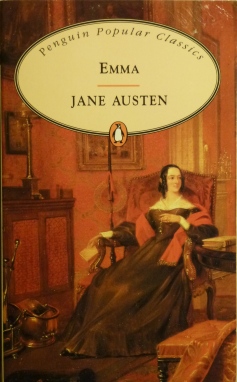 Reading gives us some place to go, when we have to stay where we are.

And of all of the places to visit, the worlds of Jane Austen have always been a decided favourite.

The reasons are manifold, a few of which are that her characters are so rich, so full of vagaries as to make them profoundly amusing; that her narration seems to be constantly making a mockery of the very ideas she is putting forward and of course, that there is always a happy ending to look forward to.

Jane Austen is known for writing romances. But, Emma, I think is a little off that mark. It is not a romance, as much as a coming-of-age story. Set in peaceful Highbury, with little to recommend of its neighbours and parties, yet with such a happy countenance of living, it presents a very nice contrast to the rest of her books, where most of the settings are full of families that go to balls and exchange gossip on a daily basis. Emma herself, is as different a character as any that Jane Austen had provided in her books. Primarily, because, as much as she is charming, she is vain and at times, downright dislikable. Further, in this book, Austen doesn’t appease the sensibilities of the reader by providing a comparable standard of behaviour in a companion. Each character in this particular book has their faults so strictly embedded in them, that it is impossible to separate the person from the fault. Yet, they are all charming in some unfathomable way that makes them quite easy to follow for 400-odd pages.

Mr. Knightly was as near to perfection as could be brought in this field of faulty people and he provides a very effective sounding board for all those times when Emma goes astray and the writer wants to remind her readers that this is not the way things are done, even if you might have chuckled at our heroine’s antics. The other settled male presence in her life, on the other hand- that of Mr. Woodhouse’s- is anything but perfect. He is neurotic to the point of irritation and the only saving grace that he can boast of is of being perfectly amicable and concerned to his very many neighbours and guests. On the whole, there aren’t any characters in this book that will not, from time to time, become irritating, be it Mrs. Weston and her doting upon everything of Emma’s, Mr. Weston and his extremely sociable nature, Jane Fairfax and her reserve or Frank Churchill and his enthusiasm. But, Austen disposes of them so efficiently, presents them in such a complimentary light, that no sooner has the glitch of irritation blossomed in your heart, will it be nipped by the next kindness they show to each other. Not to worry however, for Austen also provides us with characters with whom we could be wholesomely irritated without inviting the wrath of the writer. Miss Bates is adorable, but you cannot wish but to escape once she starts talking, for even reading the long passages of dialogue that sprout from her is tiring to the most. Then, there is Mr and Mrs. Elton. Well into the book, Austen remembers that she has to give her readers somebody to happily hate and delightfully mock and from thence, comes up Mrs. Elton with her vulgar speech and untoward liberties. Feel free, dear reader, to delight all the wickedness of your heart with every triumph Emma scores over Mrs. Elton, for even if you weren’t in support of Emma previously, she is still the lesser of two evils when compared to Augusta Elton.

Now, for the character that I’ve almost forgotten in spite of her occupying the most story time besides Emma herself. It is easy to forget Harriet Smith because Austen played her a very cruel card and kept her in the shadow in spite of being mentioned at least once on every page. Harriet’s personality is not described by the author even once. Her beauty is mentioned and maybe, her guile once in a while, but otherwise, no colourful words of Austen are wasted upon getting the reader acquainted with Ms. Smith. Instead, we are left to the mercy of the eyes and understanding of Emma, which, I’m sorry to say, leave much to be desired. Especially in the constant company and thereby, comparison to Emma’s vivacious personality, Harriet’s rather falls flat. And when you read the book (to its very end), you will understand why Austen played it so diabolically.

There are a lot of little things in this book that annoyed me. Then, I realised that was because I kept comparing Emma to the other works of Austen. This book does cut quite a few parallel roads to her ideas in many of her other books. So, my advice to you, if you have read everything of Austen and are picking up Emma, read it not as if Jane Austen wrote it; instead read it as written by an unknown historian of Highbury who hates her neighbours only a little less than she loves them. That would save you a lot of frowns and indeed, add to many of your chuckles.