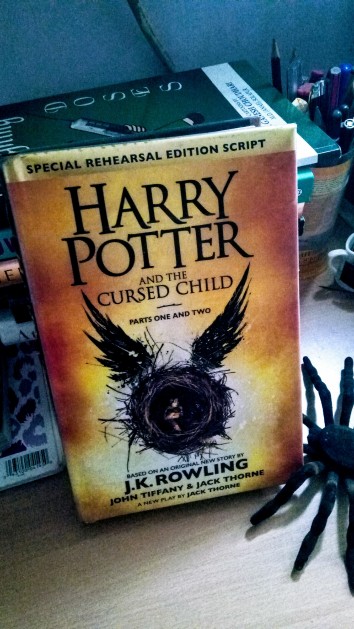 So, I got to finally read Harry Potter and the Cursed Child. I’ve kept myself deaf to all and any spoilers since the day of its release and thank goodness for that, because the story, if I had already known parts of it, wouldn’t have been fun at all.

There’s nothing to talk about regarding the writing because, of course, it’s a script and all that matters is how well it was transported on to the stage. But, I can’t be a judge of that. So, let’s talk about the story.

I have to be honest, it was a difficult 3 hour read. I almost stopped reading during Albus’s descent into an unhappy teenager. The sort of angst given to him by Rowling is something no person can deal with well and he’s a hormonal teenager through all of that. It, for the first time, made me question the wisdom in taking kids away from their parents during these unstable years of their life only to lock them up in a castle with others just like them. I understand interactions with our peers shape us; but, we need our parents to guide this shaping business so we don’t end up all wonky. But, well, that might be just me talking from my extremely fortunate, privileged upbringing. Basically, we all need our guides and teachers, while doing a lot, can only do so much.

Scorpius was pictured beautifully. His characterization gave the book a much needed levity and Draco, I was glad to see, didn’t become overnight hero-level good. The characters we knew and loved were still in character, though Ron seemed to have become much more jovial now that he’s grown secure within himself. A development I enjoyed. I do wish Rose, James, Lily and other Potterverse characters were shown a little more, but, that’s just the fan in me talking.

Now, let’s talk about the plot. It felt a little like fanfiction. But, I think that’s primarily because of …… (MAJOR SPOILERS)

……the Voldemort’s daughter angle. I’m sorry, but, I just can’t imagine Voldemort copulating! I kept thinking Delphi was born through binary fission or something, because, to me, Voldemort had nothing under his pants. Just a flat, smooth area. That’s it. I can’t even imagine him peeing or pooping. I mean, can you imagine a constipated Dark Lord? I mean, really?!

Also, the entire augurey part of it, I felt was ill-explained and the prophesy felt like an over-used plot device. The magic also felt a little too magically convenient; especially, where they find Delphi’s room. Very convenient.

I also found it hard to believe that Hermione had nothing in place to inform her if the time-turner got stolen. The bookcase scene rendering was awesome. But, I’m sure one of those books was tasked with the job of screaming if the time-turner was removed. And if they weren’t, well, McGonagall was very justified in her ire then.

All of this aside, I enjoyed the magic again. I shuddered at the alternate reality with a ruling Voldemort; I cried when James and Lily were killed, yet again; I relished every moment I got with Harry, Ron, Hermione and Ginny. And even Draco. So, even though Rowling shattered the happily ever after she’d given to our heroes at the end of the seventh book, I’ll forgive her. Because she gave us a chance to enjoy their heroics again.

BOTTOMLINE: It’s not like it matters what I think. If you’ve read the first seven books, you’ve definitely already read this one. If you live in London, you’ve definitely watched the play. And as for J K Rowling, she’s one of the richest people on the planet! She’s not even gonna be looking at this blog. But, if the miracle happens and you are reading this, Ms. Rowling, I just want to say: Thank you for letting us all take a peek into this beautiful world inside your head. Harry Potter is how I made friends growing up and for that, these books will always hold a very special place in my heart.

One thought on “Harry Potter and the Cursed Child”