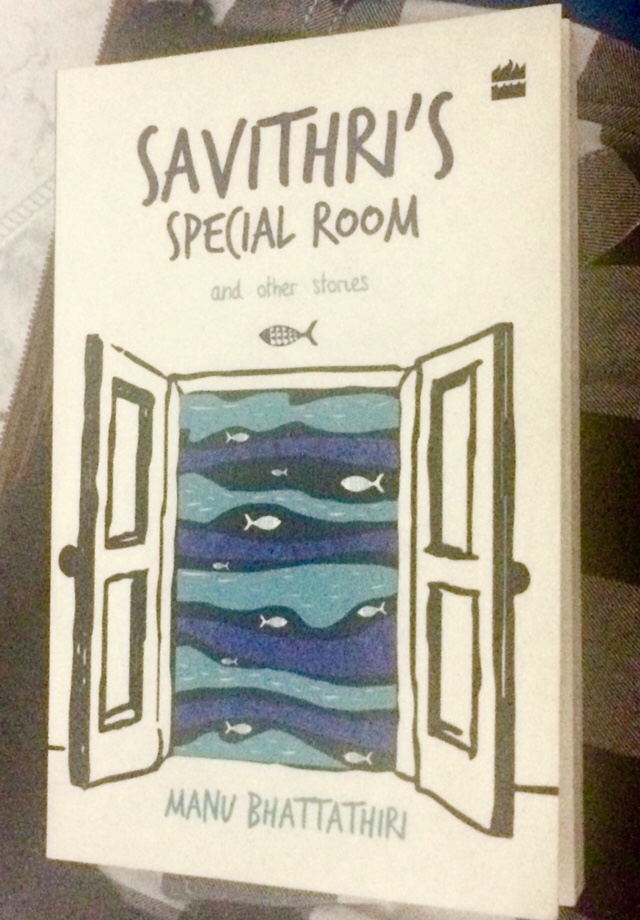 I was traveling yesterday and my travel companion was this anthology by Manu Bhattathiri.

It’s not a big book; I finished in the three hours that my flight lasted. But, it leaves you with a big feeling.

Savithri’s Special Room opens with a random discussion about winters in the village of Karuthapuzha. Apparently, it gets very cold. And it’ll take you through the stories of the one year from that winter to almost the next.

The description of Karuthapuzha is not given until the second story which is in fact one of my favourites. Because it felt like the most honest and least story-like. In a way, it felt like the author was inadvertently infusing his character into Murali. Of course, I might be entirely wrong.

But, that brings me to the characters themselves and holy heavens, are they special!

From the cruel Mothalali to the calm Vasu Appoopan and the uselessly sensitive George Kutty to saviour of the day Chamel, each of them stands out in a way that’s entirely their own. The women in these stories are not bystanders, but real people with emotions and barriers and beliefs entirely their own. Savithri who’s everybody’s grandmother, Shanta who keeps appearing as the maid of every house, Acchu whom I fell in love with too and the simple, beautiful Amminikutty- they all have their own lives and own minds. They might worship their husbands, they might prescribe to notions that are not very 21st century, but, that’s who they are and so, even if you’re inclined to, you won’t judge them for it.

All these people clash with each other and conflicts arise easily. But, they’re also solved easily since there’s work to be done and meals to be prepared.

Karuthapuzha is a strange place. It’s held in the age-old beliefs and superstitions, but mired in extreme practicality and day-to-day struggle to survive. Tree-climbing for tapping toddy is a bright career option as much as the city is looked upon as mysterious and ambiguous. A good wedding is celebrated as much as a good death. And beliefs are held with ease, released with difficulty, but respected nonetheless.

It’s a typical Indian village; but one with the openness of mind to accept an atheist, with the willingness to entertain a pornography-selling old age home, and with the audacity to have philosophical discourses across a table in the toddy shop.

So, stories come aplenty from such inconsistencies and each story is a raw gem that makes you smile, that touches your heart and that recalls to you the olden days when only R K Narayan could make you feel this way with his Malgudi Days.

BOTTOMLINE: What else can I say that I haven’t already said above…oh yes, I can say that I recommend it. I strongly recommend it. Even if the person sitting next to you looks at you strangely because you’re laughing to yourself, I recommend that you visit Karuthapuzha and lose yourself in its vagaries for as long as it lasts.