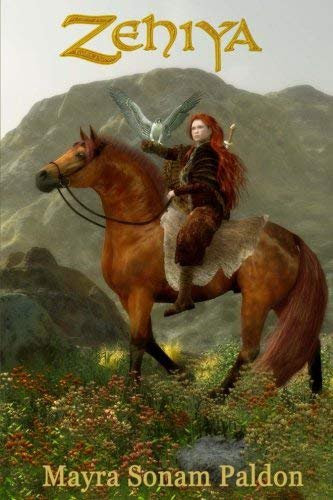 Zehiya had not planned on leaving her homestead or on setting out on a journey that’ll span the expanse of an entire trade route. But, following the spirit eagle with nothing but her faith and her belief in her own abilities to aid her, led her on a path that would change her life forever.

On a good day, the story of a journey of a young, but plucky girl brightens up my day like no other. I picked up this book with the same fluttery feelings in my tummy. And it started off well too- talking about her eagle and her falcon, introducing her horse and that she has fire for hair. It had all the ingredients for a feel-good afternoon-on-a-holiday read. Then, the journey began.

The time leaps are amazing. There’s no words wasted over the travails of a hard terrain except for a cursory mention and an occasional sandstorm. There’s also no time wasted over the pondering on what to do next; because the spirit eagle is on standby and she has all the answers. Remember when people asked why Dumbledore couldn’t guide Harry with more than a few vague hints? Well, this book answers that question by going the extreme end in the other direction. Every quandary ends in the protagonist falling asleep, flying with the spirit eagle in a dream and waking up all set aforth. And while I’d accept if it was explained, it never is made clear why our girl is so special that the spirit eagle takes such a keen interest in her life (Because of the medallion? But, it didn’t have much of a role to play beyond that of a token, I felt. Am I missing something?).

Also, this book should come with a warning. There is self-harm mentioned in the book. It comes so suddenly, so without warning, that I was as flabbergasted as the frayed vessels! Of course, our heroine overcomes this with a dash of help from the spirit eagle, a pinch of preaching from the spirit of her grandfather and a generous dollop of very self-aware self-reflection.

Talking about self-reflection, let me just say that Zehiya is one of the most dramatic protagonists I’ve come across in recent times; and I was reading Cold Comfort Farm then. She wouldn’t be out of place in an old Bollywood movie when subtlety wasn’t yet a thing for stage. I wanted to feel for her; but, all that pain searing through her chest, blood boiling and anger roiling, and of course, the impactful running off caused my eye to twitch in amusement than in empathy. On top of that, the abrupt switch between these emotions to baseline was like a jarring note in a wobbly melody.

On the other hand, I liked the book to a certain extent. I liked the prose. It was easy to read. The characters all had their own voices, even though, Zehiya’s constant self-talk got a little tiring towards the end. I, in fact enjoyed the pace, since it didn’t waste too much time talking about the difficulty of traversing a desert while being attacked by bandits. Most importantly, there is a lot of authenticity in the setting of the world. It’s evident from the descriptions of the people, the cities they travel through and the routes and risks faced that a lot of detailed research went into the making of this book.

Furthermore, Buddhist teachings form the overwhelming theme of the story. This makes in fact for a rather surprising subversion of the expected tropes of YA fiction; and that was somehow pleasing. Also, I loved her interactions with her animals. They formed some of the most satisfying relationships to see enfold. And set as it was in the background of Buddhist beliefs of being one with the nature, it felt especially meaningful.

BOTTOMLINE: I really wanted to like this book. It has a lot of things that I usually enjoy. But, it also had a very preachy tone and people with emotions that showed up all of a sudden and were all over the place. That took you out of the story, interfered with your experience. Although since the book is being marketed as a Buddhist YA fiction, I think both of my peeves are to be expected. So, if YA is your thing, I’d recommend this book. If Buddhism is your thing- I definitely recommend this book; it’s beautifully portrayed here. It’s basically the right book if you’re the right kind of audience.

Most used phrase: “…with fire for hair…” (the synonyms for ‘red’ are many…but, we prefer a flaming head of hair to a scarlet mane…)

Most you-will-be-missed-if-you’re-gone character: The spirit eagle…she be the plot device that moved the story forward

Most fun when: Bringing the described clothes to life in my imagination…the descriptions are very detailed.